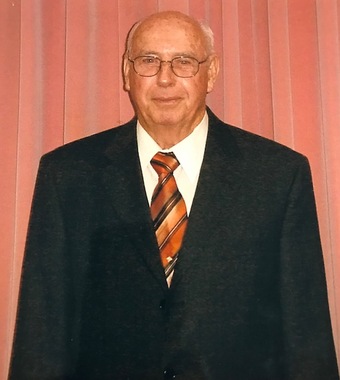 Back to Buford's story

Mr. Buford Samson Dobbs, 93, of Athens, Alabama, passed away peacefully Saturday, February 8, 2020, at his home, surrounded by his wife and family. Mr. Dobbs was born October 24, 1926 to Eddie Brondel Dobbs and Celia Key Dobbs.
He was preceded in death by his parents; brothers, Julian Dobbs of Tuscaloosa, Alabama, and Raiford Dobbs of Fayetteville, Arkansas; sisters, Christine Wiggins of Tuscaloosa, Alabama, and Maxine Norris of Northport, Alabama; and great-granddaughter, Emily Bates of Southaven, Mississippi.
Mr. Dobbs is survived by his wife, Martha Herzig Dobbs; son, Paul Dobbs Sr. and wife Deborah; daughter, Martha Manwarring and fiancé Jim Hooper; seven grandchildren; 15 great-grandchildren; five great-great-grandchildren; a host of nieces and nephews; sisters, Loyal Farley of Moundville, Alabama, Betty Stival of Fayetteville, Arkansas, and Joan Turner of Buena Vista, Arkansas; and brothers, Solon Dobbs (Vera) of Beaufort, South Carolina, and William Dobbs of West Palm Beach Gardens, Florida.
Mr. Dobbs was a member of Coxey church of Christ. He served as a minister for churches of Christ over 50 years in Camden, Center Star, Tanner, Flint and Alder Springs. Mr. Dobbs was a World War II Army Air Corps veteran. He attended Faulkner University, UNA and many Bible programs. Along with his wife, he was the owner of Sta-Klean Cleaners in Montgomery, Alabama. He also owned Ideal Bonding and Building Company, building church buildings in Alabama, Georgia, Florida and Mississippi. Mr. Dobbs retired from the postal service in Albertville, Alabama, and retired as a minister in 2006. He loved the Lord first, his wife, Martha, of over 75 years and his family, and he never met strangers. His foremost desire was leading people to the Lord.
Services for Mr. Dobbs will be noon Wednesday, February 12, 2020, at Limestone Chapel Funeral Home with Daniel Ridinger officiating. The family will receive friends from 10-11:45 a.m., prior to the service. Burial will be in Oak Hill Cemetery in Jasper, Alabama.
Pallbearers will be his grandsons. Honorary pallbearers are Paul Smith, John Lovell, Jerry Goode, Verbon Farmer, Denny Norris, Elders of the church of Christ he served.
Published on February 10, 2020
To send flowers to the family of Buford Samson Dobbs, please visit Tribute Store.

Send flowers
in memory of Buford

A place to share condolences and memories.
The guestbook expires on May 10, 2020.

Jennifer Owens
I just saw that Mr. Buford has passed. I’m so sorry to hear about it. He was such a wonderful, Godly man. I’ll always remember him teaching us about the Lord and discussing the Bible with us at work. He surely loved his wife and family. He’ll be missed.
View all