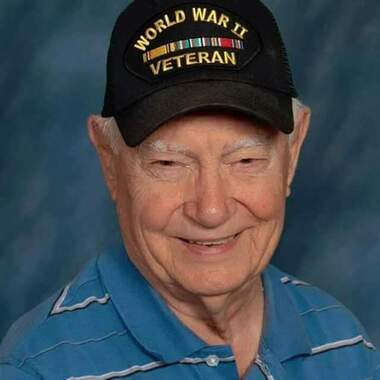 Back to Bernard's story

Bernard W. Moyer Sr., age 97, passed away peacefully in his sleep on Jan 1, 2020. He was born on Sept. 29, 1922, in Germantown, Ohio, the son of Clarence and Myrtle Moyer.
He is survived by his three children, Karen Moyer of Laguna Niguel, California, Jennifer (Robert) Wilson of Las Vegas, Nevada, and Bernard (Donna) W. Moyer Jr of Athens, Alabama; his granddaughters, Haley and Jennifer of Athens, Alabama; and his sister, Edna Mae Barnhart of Germantown, Ohio; plus many nieces and nephews.
He was predeceased by his parents, Clarence and Myrtle; his brothers and sisters, Clarence Jr, Leonard, Barbara, Russell, Robert, Irvin, Elizabeth and Dorothy; and by his wives, Noreen (Roller) and Evelyn (Lambert).
Bernie was one of 10 children who grew up on a farm in Ohio. He enlisted in the Army in 1941 and served his country during World War II as a radar tech. He saw action in Europe and was at the Battle of the Bulge. He continued his service to his country after the war, eventually relocating to Newark, Ohio, and working at Newark Air Force Station. He retired at age 55 after more than 30 years of service, and shortly after he moved to Florida.
Bernie was a sweet man who had friends all over the country. He touched everyone he met with his kindness and humor. He loved to bowl, and shared this passion with his children, creating many great memories over the years. He achieved a perfect 300 game at age 84 and went on to have one more. Bernie loved to woodwork, building many pieces of lawn furniture over the years. He also made beautiful grandfather clocks and other fine furniture.
Bernie loved his gadgets and always had to have the most updated camera, video recorder, computer and, most recently, smartphone. He had a curious mind about how it all worked and wasn't afraid of technology.
Most importantly, Bernie loved his family. He had a special relationship with each one of his children and grandchildren. He always made sure they knew they were loved, and he would have moved heaven and earth to make sure they were safe and healthy. He was married four times in his life and loved each one of his wives and their families. They each brought something special to him, and he had many great memories of the time he spent with them.
Bernie will be greatly missed by everyone who loves him. He will be laid to rest later this year at the National Cemetery in Bushnell, Florida. He will be with his third wife, Noreen, who was the love of his life. Bernie's children are grateful to all who loved him.
Published on January 3, 2020
To send flowers to the family of Bernard W. Moyer Sr., please visit Tribute Store.

Send flowers
in memory of Bernard

A place to share condolences and memories.
The guestbook expires on April 02, 2020.